Your message was sent successfully

Book Your Next Experience with Glazebrook House

We are available for exclusive use events only, including weddings and private celebrations. 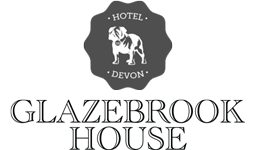 Set in beautiful, secluded grounds, Glazebrook House is a luxurious boutique hotel and restaurant with nine unique rooms and a surprise around every corner. …

Through the collaboration of our creative team and interior designs by Timothy Oulton, we have created an enchanting atmosphere with stunning British revival décor, sumptuous handmade furnishings and beguiling vintage and retro curios. We offer an ideal event destination for weddings, family milestone events corporate events and more.

While research continues regarding historic details, below is what has been gleaned to date regarding the history of Glazebrook House.

Located just outside the Dartmoor settlement of South Brent, the area known as Glazebrook is a collection of properties surrounding the beautiful Glaze brook. In 1650, a farmhouse was built on the site now occupied by the hotel, part of which still encompasses 3 existing rooms within the hotel (the vestibule plus the rooms on either side – the tasting room and the library). The extent of the farm at the time of construction isn’t known, but is assumed to have included a large area of land surrounding the house, including access to the main route between Totnes and Plymouth (which later became the A38).

In 1865, the farm house was converted into a manor house which it is believed was undertaken in 2 phases – firstly the south facing portion, then followed by the north facing section some 10-15 years later. The house is Georgian in design but includes some early Victorian elements (namely the granite entrance portico). Remains of a Victorian light-well can be seen in the reception area as well as the stained-glass windows in the stairwell used to illuminate the area with natural light. Of note in the hotel lobby is a fireplace with a detailed carved mantle depicting the 1649 trial and beheading of the Duke of Hamilton in Scotland – it includes the Hamilton family crest and is believed to have been carved sometime in the 18th or 19th century. The original servants “call system” panel can still be seen in the hotel dining room and provides insight into the various rooms which comprised the building while it was still a private residence.

Known to have occupied the house were Squire Hubert Brunskill and his wife Hilda who were resident owners from 1921 to 1945. Prior to owning Glazebrook House, the Brunskill’s owned the Buckland Tout Saints property in Kingsbridge from 1895, being forced to downsize after losing considerable wealth during WW1. In 1945 Glazebrook House was purchased by naval commander Algernon Edmund Penrice Penrice-Lyons, the youngest son of Algernon McLennan Lyons, Commander in Chief of Plymouth Naval Base and Admiral of both the Pacific and American Fleets, and relation to Elizabeth Bowes Lyons, Queen Mother (who, it is said, visited her cousin at Glazebrook during his ownership).

Following the passing of Algernon Penrice Lyons around 1970, the house was sold and converted into a hotel in 1972. Minor refurbishments/decorations were carried out on the hotel over a period of 40 years until being purchased in 2013 by Pieter and Fran Hamman, after which a significant refurbishment reopened in 2014.

You can find out more about which cookies we are using or switch them off in settings.

Privacy Policy
Your privacy is important to us. It is Glazebrook House's policy to respect your privacy regarding any information we may collect from you across our website, https://www.glazebrookhouse.com, and other sites we own and operate.
We only ask for personal information when we truly need it to provide a service to you. We collect it by fair and lawful means, with your knowledge and consent. We also let you know why we’re collecting it and how it will be used.
We only retain collected information for as long as necessary to provide you with your requested service. What data we store, we’ll protect within commercially acceptable means to prevent loss and theft, as well as unauthorised access, disclosure, copying, use or modification.
We don’t share any personally identifying information publicly or with third-parties, except when required to by law.
Our website may link to external sites that are not operated by us. Please be aware that we have no control over the content and practices of these sites, and cannot accept responsibility or liability for their respective privacy policies.
You are free to refuse our request for your personal information, with the understanding that we may be unable to provide you with some of your desired services.
Your continued use of our website will be regarded as acceptance of our practices around privacy and personal information. If you have any questions about how we handle user data and personal information, feel free to contact us.
This policy is effective as of 1 September 2018.

Strictly Necessary Cookie should be enabled at all times so that we can save your preferences for cookie settings.

If you disable this cookie, we will not be able to save your preferences. This means that every time you visit this website you will need to enable or disable cookies again.